One of the major real estate men who helped boost Grandview in the 1900s was Captain W.H. Copp who built a magnificent estate on Victoria Drive in 1905. An experienced sea captain, he had based himself in Vancouver before the city was even founded. In 1888, on a trip from Liverpool to Vancouver via Australia, he and his wife found themselves in deadly danger as this clipping from the Sydney Morning Herald on 29th December 1888 attests: 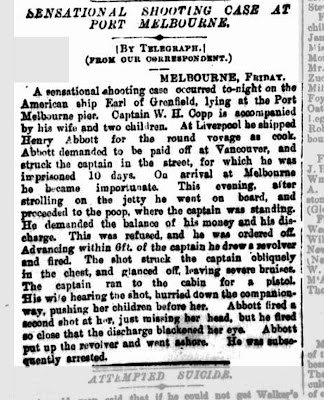 This was certainly not the end of his adventures. In 1892, after taking a vessel from Vancouver to the Bering Strait on a hunt for seals, he was taken into custody by the Russian authorities. However, he somehow managed to talk himself out of trouble; he was allowed to sail away with some British sailors who had also be apprehended. His exploits were reported to the British Privy Council.

Grandview must have seemed very tame after this!