The old York Theatre at 639 Commercial Drive is undergoing a massive renovation.

It was originally constructed in 1913 as the Alcazar moving picture show theatre. It quickly became the home of Vancouver’s Little Theatre Company who used the facilities for 54 years under the name York Theatre. Some while ago it became a movie house for Indian films called the Raja, and closed for good about two years ago.

This image from Heritage Vancouver shows the Alcazar, the York and the Raja:

Now, the front section has been demolished and today it looks like this: 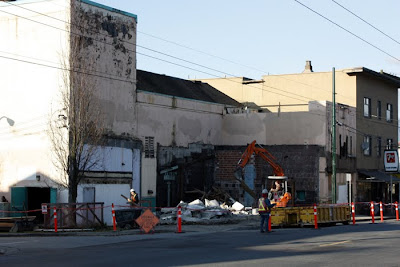 Hopefully by next summer it will be a brand-new York Theatre once again.

3 thoughts on “The York Theatre”