One hundred and ten years ago today, Grandview was essentially empty of residents with, perhaps, two score of enterprising families staking their claim in what was still mostly scrub and tree stumps. But then Dow & Co became agents for the newly opened sub-division, and they became our first boosters.  This Vancouver Daily World ad was published on 6th March 1905.

Grandview, read the ad, “has attracted more attention than any section of our city the past few months. It is not speculation but rather bona fide investment that is marking its progress. Homesites are chosen with care by residents for building on.

“We will be pleased to show you over the ground or have a talk on Grand View and its many advantages; no bridges to cross; no steamer travel, just the ordinary every day up-to-date streetcar transportation.”

This Sunday at 3:00pm we will have a small ceremony at William and Victoria to dedicate a plaque that will signifiy our work in preserving the wonderful Shelly’s 4X Sign on the outside wall of the Via Tevere restaurant.

This small ceremony will take place during a street party in that same block where cake and lemonade, music and children’s activities, a scavenger hunt and information tables will enliven the afternoon!

We welcome all of you to come and help us celebrate!

We had a splendidly full and interesting meeting last night.

Michael Kluckner led a discussion about how best we can approach the preservation of historic signs in Grandview.  These would include the Shelly’s sign at the Via Tevere Pizza restaurant on Victoria, and the Cozy Apartments sign on Commercial. It was noted that there are other signs on the Drive that are beneath thin veneers of whitewash. It was agreed that we should meet with the Tevere owners and discuss a possible repainting in the spring.

While we are talking about the Shelly’s sign, it is worth noting that the excellent images of the sign by one of our members, Egon Simons, are being used by the Grandview-Woodland Community Plan folks.

The talk of signs led us inexorably to the question of the Little Theatre sign that has been revealed by the redevelopment of the York Theatre.  The development plan shows that the wall is supposed to be covered by what appear to be white metal sheets.  However, we all agree that retention and diaplay of the sign would be a desirable outcome in what is an otherwise non-heritage renovation.  It was agreed that we will write to the developers to ascertain their plans for the sign and lobby for its continued public display.

We then turned to the matter of the Grandview-Woodland Community Plan.  Many of the people at the meeting are also members of the Community Plan PACE group and we discussed the first meeting of that Process Advisory and Community Engagement group that took place on Tuesday.  It was noted that heritage was a key factor in the discussions, especially in what the planners were keen to call “the Heritage area” east of Commercial Drive.  It was agreed that there are also pockets of important heritage value west of the Drive, many of which offer affordable housing options, and these need to be protected from any sweeping apartment-zone changes that may be contemplated in the new Plan.

There was a long and interesting discussion about the creation of a mixed cultural-industrial zone along and to the east of Clark Drive.

Talk of the area west side of Commercial was also timely because the next of our Walk & Talk series will feature that area.  One of the City’s most experienced guides, Maurice Guibord, will be leading the walk on October 20th and we’ll be publishing more details in the next little while.

Finally, we spent some time discussing additions and improvements to this website of ours.  It was suggested and agreed that we should have a page about resources for heritage home owners looking to repair and renovate their houses, and we will be gathering data for that.  We will also include a page with pointers for those looking to research the history of their homes, and this will tie in with our scheduled Talk in January on the same subject.  So, look for changes coming here soon!

On Friday evening, March 23, 2012, Dominic and Giorgio Morra’s Via Tevere PIzzeria Napoletana opened for business, clearly a unique local business and a welcome addition to the neighbourhood. It actually gives the neighbourhood a whole new feel after the  vacant, run down storefront that was there for about a decade. And thanks again to them for saving the historic sign! And what a great little vintage car they park out front, the Fiat 500  ‘Cinquecento’ that was introduced back in 1957.

By wonderful coincidence the old mural could pass for a mural depicting a chef making a pizza.

Also historically speaking, besides being the original home of Dr. Vigari art gallery (now at 1816 Commercial Drive), this building was the location of the bookstore where the climatic scene of the movie Better Than Chocolate was filmed in 1999. The movie was directed by Anne Wheeler and featured Canadian actors Ann Marie MacDonald (the novelist) and Jay Brazeau. The plot was very Commercial Drive: “Two attractive young lesbians, Maggie and Kim, meet in Vancouver, develop a passionate romance, and move in together…” One scene was based on the infamous lesbian kissing incident at nearby Joe’s Cafe, two blocks down William Street at Commercial Drive.

The bookstore in Better Than Chocolate was a representation of Vancouver’s Little Sisters Bookstore, and the plot covers some of the historic censorship issues that Little Sisters had to content with back in the stone age of the 1980s.

This advertisement appeared in the Vancouver World in January 1908. It is the earliest ad I have yet found for any business on Commercial Drive (then known as Park Drive). This pioneering grocery business operated by E.F. Hepper at 1703 Park Drive in 1908 and 1909 and moved across the street to 1742 Park Drive in 1910 where it lasted until the following year.

And they really were pioneers.  I have identified only eleven business that had operated on the Drive by the end of 1908. These included six grocery stores, three hardware stores, one real estate office and a painter/decorator company. Two of the grocers and the realtor had already closed before 1908.

1909 was a slow year for growth but by the end of 1910, the Drive could boast more than 44 businesses.  Perhaps Hepper & Lovelace couldn’t handle that much competition. 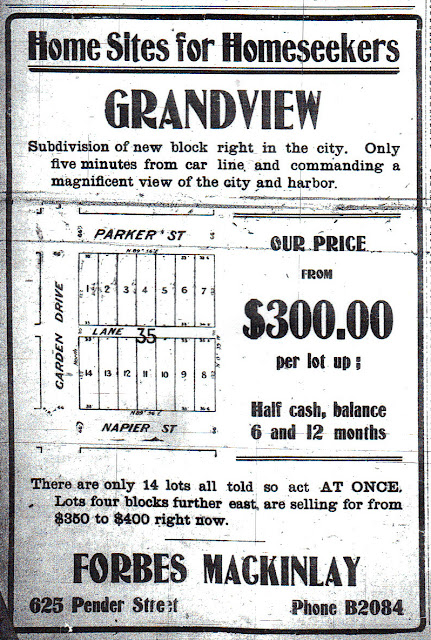 Our twitter feed @GVHeritage has brought us more interesting items:

Here is Allan Garr’s opinion that the STIR program has not brought affordable housing to Vancouver. Given the assumed change in planning philosophy, this needs to be kept in mind.

This next piece is from the Economist and discusses the feel of streetscapes and crowd dynamics.

Finally, City Archives came up with this wonderful photograph of an imitation elephant on Burrard in 1900.