It was another lively meeting last Thursday, with a wide range of topics discussed.

The new season of meetings kicked off on Thursday with a good attendance. As usual, the discussion was wide-ranging and fascinating.

We had about twenty people at our meeting last night, with a couple of new visitors.  I don’t think anyone was disappointed with all that we managed to cover in a couple of hours.

Another great meeting; I think we are really getting into our stride now.

My apologies for the delay in posting these notes;  it has been a very busy week!

Last Thursday we had a really productive meeting, covering a wide range of current and ongoing issues:

Last Thursday evening, the GHG met for its November meeting. It was another conversation full of interest, with a good turn our and new people attending. In brief, we discussed:

Another very full and worthwhile evening.

Excellent meeting last night with a number of new people in attendance, including two from Mount Pleasant who have been inspired to start a heritage group in their neighbourhood — that’s what we want to see all over the City!  There were a number of interesting items on the agenda:

A fun and entertaining evening.

We had another well-attended and very productive meeting of the Grandview Heritage Group last night, dealing with a wide range of matters:

Thanks to Jason Vanderhill, here are more images of the moving of the Jeffs House: 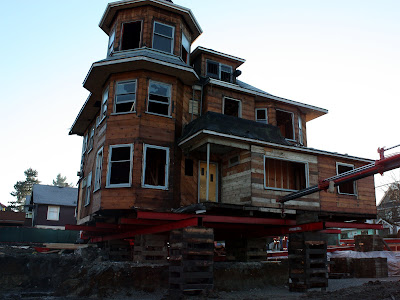 … and ready to go. Here is the Jeffs House jacked up on rollers just before it was moved across the site at Charles & Salsbury.

The Jeffs House at Charles & Salsbury is scheduled to be moved across the site tomorrow, Friday 3rd February. That should be fun!