Jack Burch worked at Grandview’s local newspaper, the Highland Echo, from 1949 until he retired in 1994 as the owner and publisher.
This video interview starts with Jack’s experiences in Grandview in the 1920s and 1930s, and covers his experiences overseas in World War II. After the War, Jack describes his work at the Highland Echo and his experiences with the Italian immigrants – who made great soccer coaches.
The interview ends with various images and articles from the Highland Echo over its long history since 1917.
This film was part of a New Horizons grant to encourage people to use their smart phones to record interesting people for the benefit of everyone, and then to encourage the use of free computer software to make the footage into interesting short films. Anyone can do it!

Once again we had a full house for our meeting on 19th February. We covered a lot of ground and had two very special visitors.

Our next meeting will be on 19th March.

We had a marvelously lively meeting on Thursday evening, dealing with a wide range of topics.

The neighborhood of Commercial Drive was served from 1917 to 1995 by a wonderfully quirky local newspaper called The Highland Echo. The Echo was defiantly local, covering no national or international news, but every week detailed the economic and personal stories that animated Commercial Drive and the wider Grandview community.  The Echo is a vital resource for anyone interested in the history of East Vancouver.

The earliest copies of the Echo have disappeared; however, the Special Collections department of the Vancouver Public Library has collected and maintain most of the weekly editions between 1935 and 1969, and these have already provided the primary resource for at least two books on the history of Commercial Drive.  An almost complete set of the editions between 1970 and 1995 – covering important cultural changes on the Drive — are held at the Provincial Archives, but their location in Victoria makes them difficult for Vancouver-based researchers to access.

The Grandview Heritage Group is proud to announce that it has purchased copies of all twenty-one microfilms of “The Highland Echo” newspaper held by the Provincial Archives and has donated them to the Special Collections department of the Vancouver Public Library, thus making them accessible for historians and researchers on the Lower Mainland.

“Community newspapers can provide an unparalleled look at the day-to-day issues and character of our neighbourhoods,” says VPL director Shelagh Flaherty, who oversees the library’s Central branch in downtown Vancouver. “It’s important that communities be able to easily connect with their history, and we are delighted to have these past issues of The Highland Echo as part of our collection.”

Kate Russell, Asst. Mgr. Special Collections, accepts some of “The Highland Echo” microfilms on behalf of the Vancouver Public Library

The Grandview Heritage Group gratefully acknowledges the significant financial assistance of Vancity and the Vancouver Foundation, without whose generous support this project could not have come to fruition. Their recognition of this important community-based project is sincerely appreciated.

Even the torrential rain couldn’t keep us away from the latest meeting of the Grandview Heritage Group last night!

We began by reviewing the latest news on rezoning following Council’s approval of the recommendations from the Mayor’s Task Force of Housing Affordability.  There was a spirited and articulate discussion that noted the economics of the recommendations are not yet clear.  However, a heritage-dense neighbourhood such as Grandview is at peculiar risk from the upzoned designations now allowed at certain distances from arterial roads and shopping areas.

Maurice Guibord gave us more details on what will be the first ever historical/heritage walk along the slope west of Commercial Drive.  The tour will go ahead rain or shine at 10:00am on Sunday morning.  Maurice promises us that it will finish at the Gelato place at Venables and Glen.

We also discussed dates for the November talk.  In the end (after the meeting) it was agreed Jak King will talk about the early history of Commercial Drive on the afternoon of Saturday 8th December in the Learning Centre at Britannia.

The maps — which are searchable by decade and lot-by-lot — need some informative and analytical text to make their interpretation as valuable as possible.  Perhaps more immediately useful are graphs produced by an analysis of the database, such as this one:

… which shows that 50% of the current building stock in Grandview was constructed by the end of the 1920s.  Talk about heritage-dense!

Once again it was an excellent meeting with a lot of information and ideas shared.

The Waldorf Hotel on East Hastings has recently been spruced up and thoroughly renovated. The work has been completed in time to celebrate the Hotel’s 63rd birthday today.

The Waldorf opened to local acclaim on 24th January, 1949. The owners put a full page ad into the previous week’s Highland Echo: 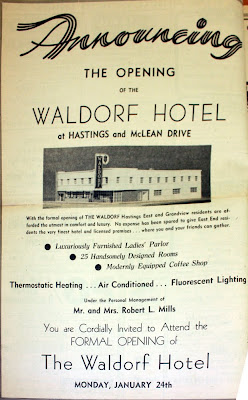